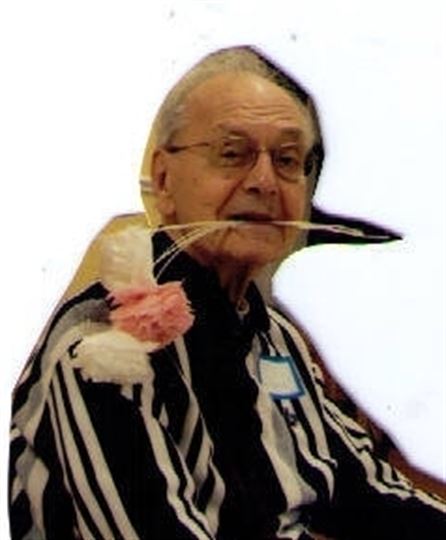 WILLIAMS D. BIG G GEHRES, 93 3/4, passed away January 29, 2014. He was passionate about theatre, his friends, aeronautics, amateur radio, teaching, and world travel. Bill earned a bachelor’s degree from Maryville College 1941 and a Master of Arts 1949 from George Peabody College for Teachers. He spent two summers at Berea College and studied theology. He served as Staff Sergeant, Army Medical Corps, in WWII. He was deployed to Iceland, England, Wales, France, and New Guinea from 1941-44. Bill married Aletta Sims in1944. He attended Carnegie Institute of Technology in 1945-46. Bill was Technical Director for Karay Theatre Studios in 1947-48. His love of drama continued as Faculty and Drama Director, at the Ohio Soldiers and Sailors Orphans Home in Xenia, Ohio 1948-49. He taught at West End High School English, Speech, Drama Director from the 1950’s-1968 and Hillwood High School English, Speech, Theatre, and Aerospace Science from 1968-1981. In 1960 he directed his high school students at West End to success-First place honors Tennessee State Theatre contest. His former students now include successful actors and playwrights. He “gave his all” to other activities, too. A licensed pilot, he owned two planes. He loved flying with his late wife Aletta who also had her pilot’s license. A licensed amateur radio “ham,” WA4BSK, he earned his DXCC for contacting over 100 countries. He loved Morse code and was disappointed when it was dropped from the requirements for an amateur license. Bill was licensed to administer amateur radio exams. For years he had weekly radio contact with his brother George WA4JJX. Big G loved Shakespeare and travelled to Stratford-upon-Avon to see his birthplace and the Globe Theatre. He continued his love of theatre as house staff usher at TPAC from 1985-2001, and continued attending theatre with friends over the years. He guest lectured about theatre and drama in Snellville, Georgia. Locally he lectured at Middle Tennessee State University and Nashville State Community College where he was a big hit into his late eighties! Bill loved travel, and saw Europe with Aletta; he had great friends in England The Mays and returned several times to visit. He travelled to France, Belgium, Holland, Switzerland, Italy, Germany, the Caribbean, Scotland and Wales. He visited all 50 states thanks to help from some friends. In his eighties he broke his ankle riding a Segway in Honolulu; it did not dissuade him from travelling to Alaska! Bill loved cats and adopted three rescue cats and gave them good lives. He loved his friends and did his best to be there when they needed help. He loved playing board games and laughing with friends, too. He was a talented magician. Big G taught himself to play the organ by ear and could transpose a piece to another key without being able to read music. He enjoyed playing the organ for friends’ weddings, and entertaining groups by playing the organ in his home and apartment. Bill was a truly fun and caring man. He and Aletta LOVED scary roller coasters, especially wood because of the sound. He was an excellent joke-teller whose repertoire included thousands of jokes he loved to tell. “Did you know that Elizabeth Taylor was an excellent house-keeper? Every time she divorced, she kept the house!” He was a positive influence on countless students, friends, fellow teachers, neighbors, and others. He and his late wife opened their home to many who needed a place to stay for a week or a year. Survivors include his son, Walter E. Terry Gehres, sisters-in-law Marie N. Sims and Martha W. Sims, nieces Ruth Gehres O’Keefe and Jo Carol Sims Dale, nephew John Granville Sims III, and numerous friends who all mourn the passing of this interesting and good man. “Good night, sweet prince. And flights of angels sing thee to thy rest!” Horacio, Shakespeare’s Hamlet Act V, Scene II On March 15th the Ides of March!, we will celebrate Bill’s life at Belmont Village, 4206 Stammer Place, Nashville, from 11-1pm. Call 904-721-8629 for information. In lieu of flowers, contribute to Alive Hospice, 1718 Patterson Street, Nashville, 37203, or the charity of your choice.