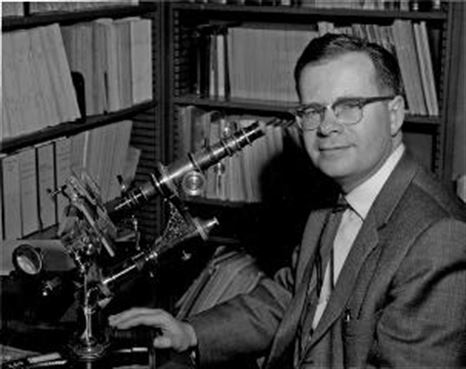 William P. Bidelman, an astronomer who played a vital role in the spectral classification of stars, died on Tuesday in Murfreesboro, Tennessee. He was 92. Dr. Bidelman, known to family and friends as Billy, was emeritus professor of astronomy at Case Western Reserve University in Cleveland, Ohio. His many academic contributions included the identification of the Barium class of “giant” stars, which he discovered along with Dr. Philip Keenan, who died in 2000. Dr. Bidelman was born in 1918 in Los Angeles, California. He spent most of his youth in North Dakota, where he met his wife of sixty-nine years, Verna P. Shirk, in elementary school. He later attended Harvard College, graduating in 1940. He completed his Ph.D. in astronomy at the University of Chicago three years later. During World War II, he left Chicago for Maryland to serve as a physicist at the U.S. Army’s Ballistic Research Laboratory at the Aberdeen Proving Ground. During his career in astronomy, which spanned more than five decades, Dr. Bidelman taught at the University of Chicago, the University of California, the University of Michigan, the University of Texas and Case Western University. He conducted research at Yerkes Observatory in Chicago, Lick Observatory in California, and Warner and Swasey Observatory in Cleveland. Dr. Bidelman was predeceased by his wife, Verna, and his daughter, Lana Stone. He leaves behind three daughters: Linda McKinley of Bloomington, Indiana, Barbara Talley of Austin, Texas and Billie Little of Murfreesboro, Tennessee, as well as eight grandchildren and six great-grand-children. In lieu of flowers, memorial gifts may be made to the Discovery Center in Murfreesboro, Tennessee. No service is planned at present.