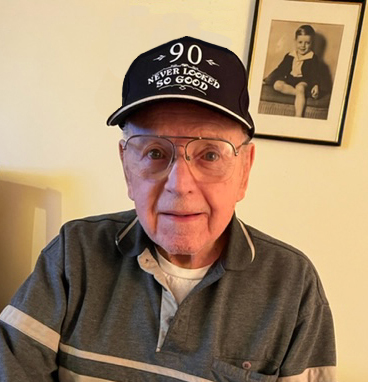 William L. “Casey” Ensor was born in Frederick, Maryland to Dorothy and Harry L. Ensor, Sr. He passed away on March 4, 2022, at age 90, after a full life. He was preceded in death by his parents and his brother Harry Ensor, Jr. He is survived by daughters Pat and Laura Ensor of Houston, Texas; grandsons Ryan and Rusty (Jenni) Hebert of Ann Arbor, Michigan; and grandson Bryant Binyon and granddaughter Leslie (Ryan Leon) Binyon of Houston, along with great-grand twins Rocco and Stella Hebert and great-granddaughter Lydia Leon. He is also survived by his companion of more than three decades, Mary Lou Redding, her daughter Lisa, and her granddaughters Rosalie and Arianwyn.

Casey grew up in Frederick, enlisting in the U.S. Air Force after high school. He served two tours, reaching the rank of tech sergeant and serving for three years in England. After the military, Casey attended the University of Alabama at Birmingham, studying business and accounting. He earned his certification as a CPA in the 1960s and for 23 years was the “Ensor” in White and Ensor Public Accounting. He moved to Nashville in 1985 and continued his career as a CPA. He left public accounting to work for the State of Tennessee for 23 years, reluctantly retiring when he was 84.

Aside from his family, Casey’s two abiding loves were athletics and music. He became an accomplished figure skater from spending his early winters on Frederick’s frozen lakes and ponds, skating (and showing off for family and friends) into his seventies. He also enjoyed roller skating, including dancing. Casey began playing basketball in high school, developing a great set shot. During his Air Force years, he served as a statistician for the Air Force basketball team, traveling with them into Europe. In one memorable game when troubles emptied the bench, he was called in to play. Since he was vertically challenged, the opponents didn’t bother to guard him; and he saved the game with a long, arching jump shot. The Air Force newspaper article about the game described him as “the pint-sized dynamo.” In addition to running, Casey swam and played basketball during his 30s, 40s, and 50s. He continued playing basketball into his late 60s and racquetball into his 70s. He ran, lifted weights, and bowled in several leagues until he was 90.

Casey sang his first solo when he was about seven years old and was part of school, community, and church choirs for decades. His beautiful tenor voice was always an asset. He spoke fondly of traveling by train as a youngster with his mother into Baltimore to attend stage shows and concerts. He enjoyed music from opera to pop, singing all types equally well. He participated in both Birmingham and Nashville church choirs and cantatas, often as a soloist.

Casey was a committed member of Brentwood United Methodist Church for more than 30 years. His welcoming smile and ready humor made him a valued member of the Brentwood UMC singles program. He will be remembered as a warm, loving, witty, honest, generous, faithful man, one of the genuine “good guys” in this world.

Celebration of life will be held Monday, March 14, 2022, beginning at 12:00 p.m. at Brentwood Methodist Church, 309 Franklin Road, Brentwood, TN. The family will receive friends from 11:00 AM to the start of the service.

Gifts in his memory can be made to Alive Hospice, Brentwood UMC, Second Harvest Food Bank, Union Rescue Mission, or groups supporting veterans.