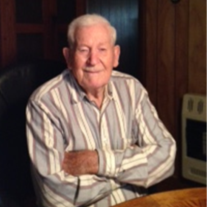 Walter L. Matthess, a proud member of “the greatest generation”, passed away March 1, 2017.

Born January 6, 1921, to Kenneth Matthess and Lurla (Whalen) Matthess of Muscatine, Iowa.
Walter enlisted in the U.S. Army Air Corp July 12, 1941 and served for over three years throughout the South West Pacific as an aircraft mechanic. After WWII he reenlisted in the U.S. Air Force and served for 20 years at various bases in California, Texas, and Illinois before retiring at Chanute AFB in Rantoul, Illinois. Walter started a second career as a civil service employee, working at Chanute as a transit alert aircraft mechanic and later a steam fitter in the Civil Engineering squadron. In 1975 Walter retired from federal service and moved to Lawrenceburg, Tennessee. In Lawrenceburg he made many friends through the Lawrenceburg VFW and while working at Jaco’s Marine. Walter was his happiest hunting and fishing with his friends and family across the Tennessee countryside. In his later years he found real joy in family gatherings as the chief story teller and family historian.

In 1945, President Harry Truman said, “Our debt to the heroic men and valiant women in the service of our country can never be repaid.” In lieu of flowers, please honor Walter L. Matthess, WWII veteran, through a memorial contribution to a charity of your choice.