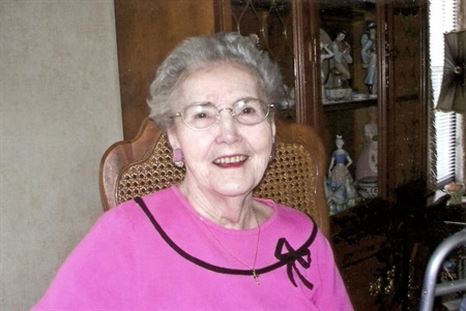 Mrs. Terez Nagy, age 88 of Summertown, TN, known to friends as “Babi”, died Monday evening, September 21 in Maury Regional Medical Center in Columbia, TN. Born in Salzburg, Austria, she was the daughter of the late Franz & Rosalie Veres and married Karoly Nagy in 1948 in Budapest, Hungary. In October 1956, she and her husband, with her mother and their two young children, escaped from Hungary and the spreading communism of Eastern Europe, to come to America. Her late husband, Karoly, was in the Hungarian Army and was part of the famous and prestigious Honor Guards of the Crown of St. Steven of Hungary. St. Steven received the crown from Pope Sylvester II and became Hungary’s first king in 1000 AD. Today, the Royal Crown is on display in the Parliament Building in Budapest as Hungary’s most precious treasure. Babi’s daughter visited Budapest in 2008 and viewed the crown her father guarded. Terez, “Babi”, served as a private cook at the Detroit Racquet Club for many years. Karoly and Babi loved to travel, going back to Hungary, British Columbia, California and Los Vegas. She loved to gamble and would save nickels and dimes for a whole year to take to the casino to play. She also enjoyed collecting Hungarian Figurines, needlework, reading, movies, and entertaining 20-30 guests with elaborate dinner parties each weekend. They loved to socialize with friends, and “Babi” had this natural beauty wearing only lipstick. Karoly was president of the Hungarian Freedom Fighters Club and they would host parties at the Ponchartrain. She loved music and dancing. She was very famous for her fabulous Hungarian cooking like chicken paprikas, homemade chicken soup and cucumber salad. Her Dobos Tortes and Orange Chocolate Tortes were always requested at her dinner parties. Upon her husband’s death in 2004, she moved to Tennessee to be with her youngest son. Mrs. Nagy is survived by three children: Mary Nagy Joseph Moore of Macomb, MI, Frank Nagy of San Francisco, CA, and Paul Nagy of Summertown, TN; 3 grandchildren: Tina Young of East Tawas, MI, Paul Nagy of North Richland Hills, TX, and Jonathan Nagy of Summertown, TN; and 4 great-grandchildren, Alex Collins stationed in San Antonio, TX and Adam Collins. The family will celebrate her life with a funeral mass at 12:00 noon on Saturday, Oct. 10, 2009 at the Holy Cross Church, 8423 South St in Detroit, MI. Burial will take place at a later date at the Lake Havasu Memorial Gardens of Lake Havasu City, AZ.