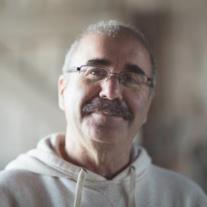 Steve Frohlich, age 62, of Thompson Station, passed away on Monday, November 9, from injuries sustained in an automobile accident.

Steve was born April 11, 1953 in Detroit, MI. He was the son of the late Arthur Frohlich and Harriet Glanzrock Frohlich. He was the husband of Lilli Sheldon Frohlich of Thompson Station. He was a graduate of Eastern Michigan University and had been a salesman for Community Creations.

In addition to his wife, Steve is survived by his daughter and son-in-law Jennifer Frohlich Cruger and Matthew Cruger of Spring Hill and grandchildren, Lucas and Annie Cruger.

If you would like to make a donation in his honor, please do so at The Gentle Barn – Tennessee (www.gentlebarn.org/tennessee).

The Cremation Society of TN is assisting the family with arrangements.