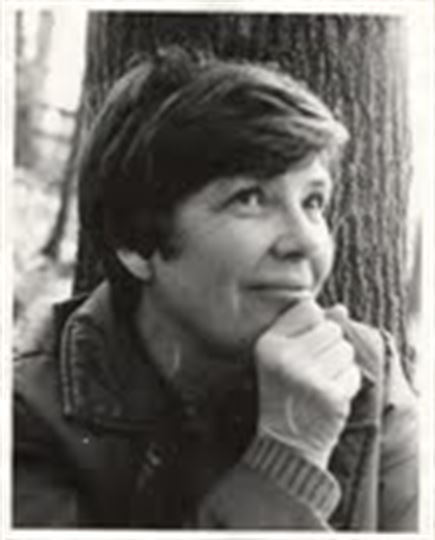 Shirley McAllister Ludwig, a former resident of Rockville, MD, passed away on Friday, March 4, 2011, at Alexian Village Health Care in Signal Mountain, TN. She was 89. Born in Pittsfield, MA, Shirley was the daughter of the late Thomas Savory and Ethel Bentley McAllister and was a native of Rochester, NY. She graduated first in her class of 70 from West High School in Rochester. She attended Judson College for one year in Marion, AL., and in 1943 received her BA from University of Rochester, where she was inducted into Phi Beta Kappa. She earned her master’s degree from Brown University, writing her thesis on novelist James T. Farrell. She taught freshman English at Wayne State University in Detroit, MI and in her dedication to her students, often offered to meet with them for extra help. Her first classes were made up of WWII veterans, including her future husband. She married Leon X. C. Ludwig in July 1947 and was married for 57 years, living in Michigan for almost 25 years until they moved to Maryland in 1971. She taught English at Montgomery College in Rockville, MD, where she had all of her students read and write about Martin Luther King’s Letter from the Birmingham Jail. Shirley was raised an American Baptist, and with her family, she attended the Central United Methodist Church in Detroit, where Martin Luther King, Jr. spoke multiple times in the 1950s and 1960s. His last sermon was delivered just three weeks before he was assassinated. Shirley was concerned about civil rights from her youth. After moving to Maryland, she attended the Sandy Spring Friends Meeting MD, Florida Avenue Friends Meeting DC, and Unitarian Church of Rockville MD. While at her summer home in PA she attended the Wellsboro Friends Meeting, and during her last two years in TN, she attended the Signal Mountain Church of Christ. Shirley loved music and sang in several community choruses including the Detroit Rackham Symphony Choir affiliated with the Detroit Symphony Orchestra with her dear friends Shirley Denman and Nadia Stratalak, and the Montgomery County Community Choir MD with her friends Wilma Conti. She also sang in a German choir with her friend Gisela Turpin Bennie. She played the violin in the Montgomery College Community Orchestra MD and Harrisburg Symphony Orchestra PA, and the piano at home for fun. She encouraged her children to paint and perform music as a group. She loved to laugh, had a spontaneous spirit, aged gracefully, and kept her childlike wonder of the world. She encouraged her family to spend time in nature with weekend walks on the C&O Canal and at Lake Needwood in Maryland. During inclement weather, Sundays afternoons were spent at the National Gallery of Art or the Smithsonian, staying for the evening live weekly concerts. Her favorite composers were Handel and Bach. In 1984 she purchased a house and land near Hills Creek State Park, and that became her favorite summer place to spend time with family, paint watercolors, and help with her husband’s garden. She also joined her husband on precarious boat rides in his homemade sailboat with their seven children and later in his 26″² El Capitan sailboat in the Chesapeake Bay. Music remained a part of her life up to her last day. Her son David a professional luthier who performed on his newly-finished violin and Lisa Ferguson, a champion hammered dulcimer player, provided an hour-long private concert at her bedside on March 2. Her last smile was seen on her face as her son Paul and daughter Mary sang the Hallelujah Chorus from Handel’s Messiah the next day. Her daughter Leona was by her side when she passed peacefully the following evening. Her sons David, a Scottish fiddler, and Tom, a graduate of Julliard, performed violin at the memorial service on Saturday, Mar. 5. In addition to her parents, Shirley was preceded in death by her husband, Leon X. Chrapkiewicz Ludwig in 2004, and her brother, Charles B McAllister. She is survived by her sister, Constance McAllister Camnitz of East Aurora, NY; seven children: David Carolyn Chrapkiewicz Rapkievian of Washington Grove, MD, Dr. Linda Ludwig Dr. Phil Dvoretsky of East Aurora, NY, Thomas Ludwig Insuk of Duluth, GA, Suzanne Ludwig of Hockessin, DE, Leona Ludwig of Whitehouse, TX, Mary Brian Baxter of Signal Mountain, TN and Paul Ana Marie Ludwig of Gaithersburg, MD; and 13 grandchildren: Michael Rapkievian, Rachel Dvoretsky, Reuben Dvoretsky, Jacqueline Ludwig, Sarah Ludwig, Tommy Ludwig, Kendra Wernle, Alexandra Wernle, Cyrus Mahdavi, Lori Baxter, Leah Baxter, Cathy Ludwig and David Ludwig. Shirley was deeply loved by her family and the Alexian Inn members and staff, as well as her special friend, Karo. She will be missed and remembered by all of us. The family conducted private memorial services to celebrate Shirley’s life at the Signal Mountain Church of Christ. In lieu of flowers, donations may be made to the Chattanooga Area Food Bank at 2009 Curtain Pole Rd, Chattanooga, TN, 37377, Chattanooga Symphony Youth Orchestra at 701 Broad St., Chattanooga, TN 37402, or your favorite charity. All are invited to a public memorial service will take place at McCathran Hall, Washington Grove, MD on June 12, 2011 at 2:00pm.