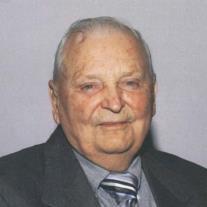 Robert was born January 29, 1928 in Ft. Covington, New York to Nelson S. and Myrtle Lott Lyons. He graduated from Franklin Academy and attended Adirondack School of Commerce. Robert served in the U.S. Navy during WWII in the Pacific theater. He married Marie Paule Tremblay of Valley Field in Quebec, Canada on September 23, 1950. He retired in 1985 from the U.S. Postal service as a Rural Mail carrier in North Lawrence and Brushton, New York. Robert was a charter member of North Lawrence Fire Co. and served as the chief for nine years and as treasure for four years. He served on the St. Lawrence Co. Fire advisory board, and was a past member of St. Lawrence Co. Fire Advisory member. He was a life member of B.P.O.E. 1303, Malone. He was also a member of American Legion Post 219 Malone and Post 7326 VFW, North Lawrence. Robert and Marie moved to Spring Hill, Tennessee in 1997, and he attended the Thompson Station United Methodist Church.

Robert was preceded in death by his wife Marie of 59 years; his parents; daughter Valerie A. Peck; and two brothers N. Stanley Lyons and Carmon Lyons.

Inurnment will take place at Morningside Cemetery in Malone, New York at a later date.