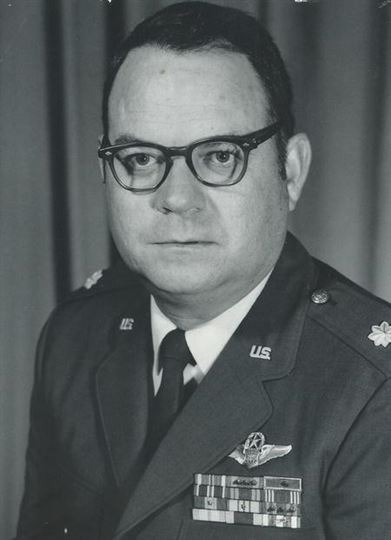 FRANKLIN Maj. ret. Robert “Bob” Leonard Card, age 80, of Franklin, TN, died August 12, 2013. He was one of eight children born to Robert M. Card a fur trapper and his wife Doris Card, in New Hampshire. Bob was a 1951 graduate of New Boston, N.H. high school. Attending the U of N.H. he enrolled in the Air Force ROTC program. In 1954 he enlisted in the U.S. Air Force and was stationed at Lackland AFB, TX for the Officer Cadet Program. Upon graduation, as a 2nd Lt. his first assignment was as a Navigator Instructor at Lackland. His next assignment was Navigator with the 57th Fighter Interceptor Squadron, in Iceland. In 1961, while stationed in Alabama, he met 2nd Lt. Barbara Janicki at the officer’s club; the pair were married within a year. In 1964 he was stationed at Warren AFB Wyoming where he was a missile crew commander and attended the University of Wyoming, acquiring a degree in mathematics. In 1970 he served as a Master Navigator in the 76th Fighter Interceptor Squadron in Vietnam, earning the DFC amongst other service decorations. In 1971 he was transferred to Hanscom Field, MA, where he won a commendation as a key analyst who aided in the development of the “Combat Grande” defense program for the government of Spain. In 1974 he honorably retired from military service having served 20 years, and continued his public service with the Massachusetts Dept. of Transportation, before beginning his career with the Small Business Administration SBA. During his 20 years with the SBA, despite multi-state transfers, he continued to hone his skills by earning his MBA from Golden Gate University. He moved to Tennessee in 1982 where his eye for detail, quiet ability to lead, teach and learn was put to good use by the SBA. His talent and love of public service helped many young businesses in the Nashville and Middle Tennessee area become established and thrive. After retiring from SBA in 1997, he returned to TN after a stint in Atlanta to be closer to his children and their families. He was an avid golfer. He was first and foremost, a loving husband, father, father-in-law and grandfather. He was, to the very last, a man of notable integrity and grit who saw opportunity in failure, success in persistence, and the value of living life as a gentleman. He lived his life the way a man should live, and his family prospered for it. He will be sorely missed. He is survived by his wife of 52 years, Barbara; sons David, Chris Elizabeth, Jeff Ramona, daughter Jennifer Jim Hosford; and five grandchildren Keisha, Allison, Kiersten, Macklin, and Jake; and his own brothers Dean Pat, Don Gail, and sisters Kay Kennedy, Jane Wall, and Andrea Card, all of NH. As appropriate, interment with full military honors will be held at Middle Tennessee State Veterans Cemetery in Pegram, TN Monday, August 19th. In lieu of flowers, the family respectfully requests that memorials may be made to the Salvation Army or Remote Area Medical Foundation www.ramusa.org. Go Braves!