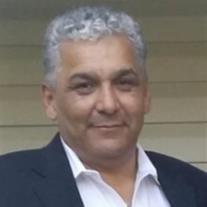 He was born in Elgin, Texas on February 19, 1957 to the late Adrian and Doris Muniz. Bobby is survived by his wife of thirty-eight years, Brenda and the pride of his life, his three sons, Stefan, Kaz, and Bryson, as well as close family friend Shanta Hurt. He is also survived by three sisters and three brothers, all originally from Elgin, Texas. Bobby, with his wife, owned Fantastic Sam’s of Tennessee and has been a prominent small business owner in the Greater Nashville area for over thirty years. He was an avid golfer and sports fan.

A memorial service will be held Thursday, April 9, 2015 at 4:00 p.m. at Holy Family Catholic Church in Brentwood, Tennessee.