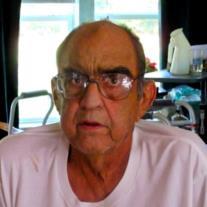 Richard Woodrow Corle, age 77, passed away on Thursday, August 20, 2015 at his residence in Hohenwald, Tennessee.

Richard was born on April 1, 1938 to the late Lloyd Woodrow Corle and Gertrude S. Benton Corle in Imler, Pennsylvania. On August 11, 1962, Richard wed Georgia Lee Breitzke. They just celebrated fifty-three years together. Before retiring, Richard worked as an electrician for thirty-three years. Prior to relocating to Tennessee, Richard and Georgia owned and operated Bayou Resort in Mountain Home, Arkansas for thirteen years. He was a general outdoorsman, but especially loved hunting and fishing. Richard had a love for sports, especially baseball. When he was younger, Richard was a standout athlete in wrestling, football, and baseball. He even continued playing sports as he got older and played softball with the America Legion over 40 division. Richard was a great husband, father, and grandfather. He was especially loved by his grandchildren.

The family will have a memorial service at a later date in Highland, Indiana. An inurnment will be held at Corle Cemetery in Imler, Pennsylvania where Richard will be re-united with many family members.

Richard was preceded in death by his parents Lloyd and Gertrude Corle.