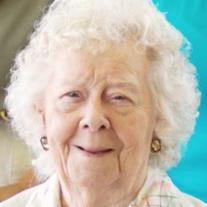 Mrs. Taylor was raised in Calhoun, Ellijay, and Blue Ridge, Georgia. Mrs. Taylor married her husband, Harold, on October 5, 1940, and lived in Bartow County, Georgia. In 1942, Harold entered World War II and was stationed in Iceland. Mrs. Taylor worked at Klopman Mills in Shannon, Georgia during the war. In 1945, their son Frank was born and six months later Mr. Taylor returned from his military service. At this time, moving his family to the Mill Village in Shannon, Georgia, where he returned to his supervisory position at Klopman Mills. Their son Dillard was born 1948. Shortly thereafter, the family moved to a farm located on Bells Ferry Road now known as Crowder Road in Shannon, Georgia. A few years later Tammy was born. The family continued to live at this location until 1974, at which time, the family moved to Calhoun, Georgia. Mrs. Taylor lived in Calhoun until 1994. Mrs. Taylor then moved in with her daughter and son-in-law, Tammy and Michael, to Lakeland, Florida. In 1996, the family moved to Crossville, Tennessee.

Mrs. Taylor was an amazing Homemaker, Cook, Wife, Mother, Grandmother, Great Grandmother, Aunt and Friend. She lived through the “Great Depression”, World War II, and many other trying times in life. She worked hard, was kind, loved everyone, and has been an inspiration to all who have known her. She was a “True Lady”. She is greatly missed, but is now getting some well-deserved rest.

A “Celebration of Life” luncheon was held for Mrs. Taylor at the Adairsville First United Methodist Family Life Center in Adairsville, Georgia on Saturday January 17, 2015, from 1:00 to 3:00 p.m. Family and friends were in attendance.

In lieu of flowers, the family has requested that donations be sent to:
The Wounded Warrior Project P. O. Box 758517
Topeka Kansas 66675