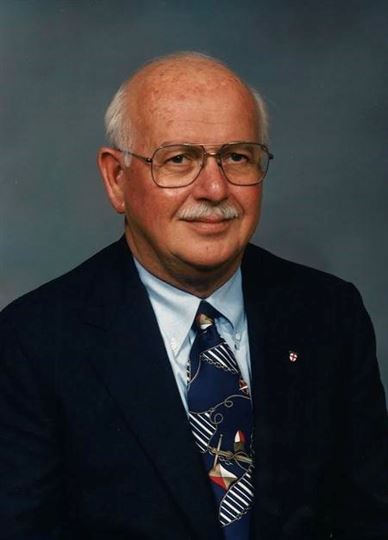 Raymond Trask Throckmorton, Jr., was born May 12, 1925, at South Bend, Indiana and was the only son of Raymond T. Throckmorton, Sr., and Irene B. Siems Throckmorton. Mr. Throckmorton was predeceased in 1987 by his wife, Hester Yvonne Shaver Throckmorton. He is survived by a daughter, Karen Elaine Gallagher and her husband, Charles Gallagher; a son, Raymond T. Throckmorton, III, his wife, Elizabeth Louise Holder Throckmorton; as well as three grandchildren: Christina Gallagher Claxton, her husband, Dan Claxton, James Edward Throckmorton and Mary Elizabeth Throckmorton; great-grandson, Jack Claxton. After graduation from training at Ft. Benning, GA in 1943, he attended the University of Wisconsin under the Army’s ASTP program and subsequently served as an amphibious infantryman in Co. “F”, 381st Infantry Regiment, 96th Infantry, Deadeye Division, form 1944-1945. Mr. Throckmorton was one of a small group chosen to spearhead the invasions of Leyte Philippines on October 20, 1944, as well as Okinawa Jima Japan on April 1, 1945. He was awarded the Bronze Star, Purple Heart with Oak Leaf Cluster, two Bronze Arrowheads, Combat Infantry Badge, Philippine Liberation medal and a Presidential Unit Citation for, “Extraordinary Heroism in Military Operations, Okinawa.” Following his service to our country, Mr. Throckmorton graduated from the University of Notre Dame in 1950. He moved to Nashville following graduation and was employed by the Nashville District Corps of Engineers, ultimately as Assistant District Geologist. Mr. Throckmorton participated in the design for the Old Hickory and Cordell Hull projects; the St. Lawrence Seaway locks, as well as many other projects. In 1953, Mr. Throckmorton co-founded a geotechnical engineering firm then known as Geologic Associates. He was licensed in various states as an engineer and/or a geologist. He served as President of the International Association of Engineering Geologists in 1975; a Senior Fellow of the Geological Society of America; and, a Life Member of the American Society of Civil Engineers. He retired from active professional practice in 1987. In 1965, he was the recipient of the Distinguished Graduate Award during the University of Notre Dame’s College of Science, “Centennial of Science Awards” presentations. Mr. Throckmorton was active in the Boy Scouts of America, having served for several years as Scoutmaster of Troop 217, chartered to First Presbyterian Church, Nashville. His life was characterized by his devotion to his family, his love and sacrifice for his country, his dedication to scouting and making a difference in the lives of many young men, and his faith in our Lord and Savior. Memorial contributions may be made to the Walter R. Courtenay Eagle Scout Trust Fund, R.D. Garth, TTEE, the First Presbyterian Church, 4815 Franklin Road, Nashville, Tennessee 37220 or the charity of your choice.