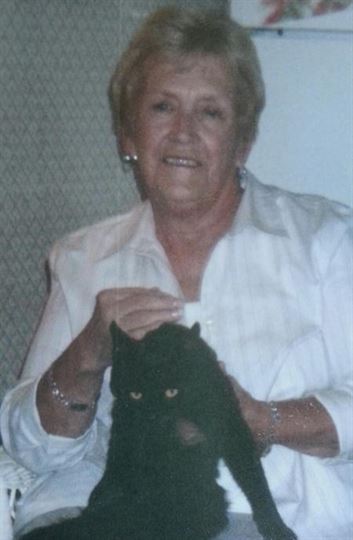 Julia Anne Lantz Heiden went to be with the Lord on Monday, October 28, 2013. Julia Anne died from a long battle of cancer at the Hillcrest Nursing Home located in Ashland City, Tennessee. Survivors include her only child, Heather E. Heiden from Nashville, Tennessee, her two grandsons, Ross E. Marshall from Austin, Texas and Wade R. Nohejl from Nashville, TN. Great-Granddaughter, Amarie Blu Marshall of Austin, Tx. She is also survived by her sister, Maurita Lantz Rissler and her brother, Michael Lantz. She was preceded in death by her mother, Ruth W. Callihan of Browning, Missouri and her father, Maurice C. Lantz of Browning, Missouri and stepmother, Marion Schrock Lantz of Browning, Missouri.; brother, Ronald Lantz of Browning, Missouri, Newphew, James Lantz of Browning, MO. The family is grateful for the gentle loving from family & friends who have taken care of her the last four years at home, before her 1 yr. stay at Hillcrest Nursing Home. The family also wishes to thank the staff at the Hillcrest Nursing Home and the community of Ashland City, Tennessee who genuinely care about their residents. Julia Anne graduated with a B.A. Degree in Biology and Chemistry from Culver-Stockton, Canton, Missouri. Upon graduation she received a Carnegie Fellowship to attend Peabody at Vanderbilt University in Nashville, Tennessee where she received her M.A. Degree in Chemistry & Mathematics, where she continued to teach to undergrads in 61″². She taught science, chemistry, physics and mathematics during her career. She taught high school in Aberdeen, South Dakota, 69″²-71″². Then to teach Chemistry & Physics in 71″² at Eisenhower High School, Decatur, IL until her retirement in 2001. She then stayed to teach part-time until 2009. Julia Anne was a member of the American Association of University Women, Illinois Chemistry Teachers Association and National Education Association. She supported many charities, i.e. Autism, Illinois Education Association and Lakota Educational Foundation in South Dakota, to name a few. After retirement Julia Anne taught chemistry at Richland Community College, Decatur, Illinois. She truly enjoyed teaching and working with students because of the great personal satisfaction in seeing her former students do well in the sciences as they continued their education. Julia Anne’s legacy was the love and devotion as a mother, grandmother, teacher and friend. Julia was always available to her family and friends whether it was day or night. She was known for her many field trips with her students so they could learn in “real life” term what physics and chemistry means to our lives. Julia was described as one of the strongest women of her generation. She was able to successfully develop her career while fully accomplishing her role as mother, mentor and teacher. We who love her know that Julia Anne Lantz Heiden was a woman after God’s own heart! Please join her family in a celebration of her life on Sunday, November 17, 2013 from 5:00 p.m. – 9:00 p.m. at the Grace United Methodist Church in Decatur, Illinois. Julia Anne will be laid to rest in Browning, Missouri on Tuesday, November 19, 2013 at 11:00 a.m. More information about these services and ability to send your regards to the family can be found at cremationsocietyoftn.com