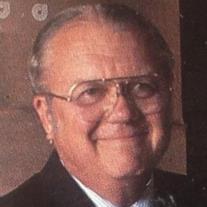 John was born on October 31, 1927 in Hamilton Ohio to David and Edna (Floerke) Redlin. He was preceded in death by his parents and sister, Joanne Frost, and brother, Donald Redlin. John graduated from Hamilton High School to join the Navy’s V-12 pilot training program during WWII. He served in the Naval Reserve as a Lieutenant JG until 1966. He graduated from Miami University in Oxford, Ohio, where he was a member of the Sigma Chi fraternity. He was married to Dawn Drake on July 5, 1952 in Hamilton, Ohio. Following graduation, he worked for General Motors, then Champion Papers until 1968 when he accepted the position of General Manager of Cordage Papers in Nashville. John was a Kentucky Colonel, a long-time member of the Print Industry Association of the South (PIAS) holding several offices and was recognized as the 1986 PIAS Man of the Year.

He retired from the paper and printing industry in 1992 and began his years as a gentleman farmer on his College Grove farm. Although he was an avid golfer, in his retirement, John became a collector/restorer of antique John Deere tractors and on occasion was seen participating in the Eagleville tractor pulls. Additionally, he owned a Belgian mare named Helen who became his much loved pet for many years.

A memorial service will be announced at a future date. In lieu of flowers, donations may be made to Alive Hospice.

Cremation Society of Tennessee is assisting the family and online condolences may be made at cremationsocietyoftn.com.