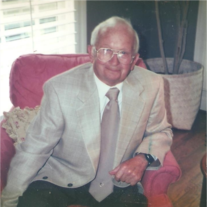 Howard spent his career as a Conductor on the CSX Railroad, retiring in 1983.

Howard was a devoted and loving husband for 74 years. He was an amazing father, grandfather, and great-grandfather. He will be remembered for his intense love of the Church, his compliments to the ladies, his smile, and his commitment to everything he embraced.

Visitation will be held April 5, 2016, from 12:30 – 2:00 at Judson Baptist Church. A Celebration of Life service will be held following the visitation.