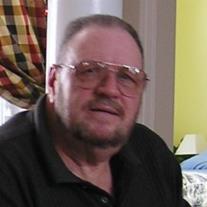 John Eugene Lotspiech II age 74 of Lawrenceburg, TN passed away on October 28th, 2015 at his residence from an extended illness.

John was born April 29, 1941 in Chicago, IL. He served in the US Navy from 1958 to 1962. Preceding him in death were his parents John Eugene Lotspiech, MD and Annette Bay Lotspiech.

He is survived by one brother Graham Walker (Nancy) of Scottsdale, AZ, one sister Cher Cull Wix (Gary) of Ethridge, TN, a very special friend Joyce DiCapo, one daughter Laura Leanne Lotspiech, and one son John Eugene Lotspiech III (Angie) all from Lawrenceburg, TN. Several nieces and nephews also survive. Many thanks to the nurses of Hospice Compassus. In honor of John’s wishes, memorial services will not be held. In lieu of flowers, donations may be made to Hospice Compassus or The Wounded Warrior Project.