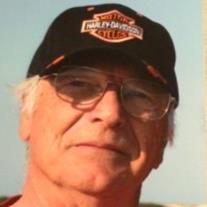 Jim was born on January 21, 1950 in Trenton, New Jersey to Mary Blusnavage Bogdol and Bernard (Whitey) Bogdol. He worked in auto body for many years before becoming disabled. Jim enjoyed hunting, fishing, camping and attending antique car shows and swap meets. Jim was a very loving father, husband, brother, great friend, and ‘Poppy’ to his grandchildren. He was so proud of his children and grandchildren. He was very supportive of his daughter, Sensei Angela Meglis, who teaches a free Martial Arts Class and other Self-Defense Classes throughout the county. Jim was deeply loved and will be greatly missed.

He was preceded in death by his mother: Mary Blusnavage Bogdol, his father: Bernard (Whitey) Bogdol, his brother: Dennis Bogdol, and his son: Ryan Bogdol.

A memorial service for Mr. Bogdol will be held Sunday, March 15, 2015 at Craft Memorial Church in Columbia, TN. Service will begin at 4:00 PM. Please contact Angela through facebook or text if you would like to attend a dinner provided by the church following the service.

In lieu of flowers, the family requests you “pay it forward” or contact the family to donate to Angela’s Karate for Christ free Christian outreach program.

The Cremation Society of Tennessee is assisting the family, condolences may be made at www.cremationsocietyoftn.com