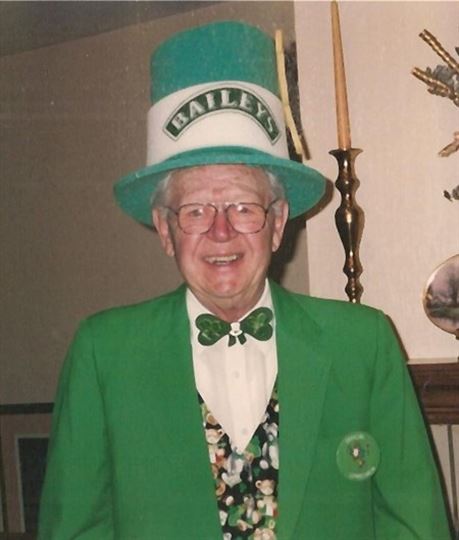 John Donald “Jack” Mooney, age 88 of Columbia, died Saturday morning in NHC-Hillview. Jack was born in Chicago, IL, the youngest of three sons, to Joseph and Alice McClintock Mooney. His older brother Joe, was a judge, and his middle brother, Walter was a police detective. Jack married Bette Jean Harpold, “the love of his life”, in January 1947. He was well loved and respected by everyone he encountered. Jack never knew a stranger and called all of his lady friends “Babe”, and his guy friends, “Buddy.” Over the years he was affectionately known as Moon, Papa, Pop, Papa Moon and the “Babe Man.” It was no surprise that “Moon River” was Jack and Bette’s favorite song. Jack was a proud veteran of the United States Air Force, and always valued service to his country. He had a wonderful career which spanned 50 years in the phone industry. Jack was a man ahead of his times, who received many awards for his dedication, work ethic, honesty and record number of sales. That being told, his first priority was always his family. He is survived by his loving daughters: Diane King of Columbia, TN and Sue Harsa of Chicago, IL; 4 grandchildren: Todd Koenitz, Carey Koenitz, Andy King, and Aimee Alberd; and 4 great-grandchildren: Logan Koenitz, Carter Koenitz, Hannah Alberd, and Graham King. The family will gather with friends for the funeral mass on Tuesday at 10:00 AM at St. Catherine’s Catholic Church in Columbia, TN. Following the mass, they will gather with friends to share stories and memories at Williams Funeral Home from 12:00 noon until 2:00 PM. Committal services will take place in St. Louis, MO.
**************** May the road rise up to meet you.
May the wind always be at your back.
May the sun shine warm upon your face,
and rains fall soft upon your fields.
And until we meet again,
May God hold you in the palm of His hand.