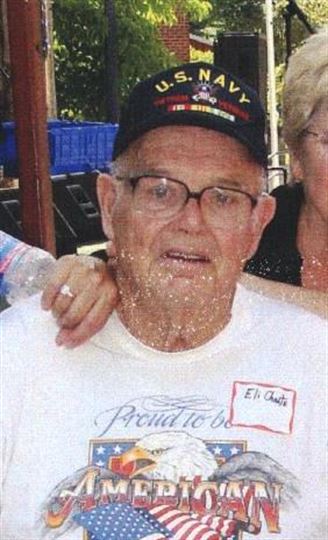 Eli Lewis Choate, age 79 of Ozark, Missouri, formerly of El Dorado Springs, Missouri, passed away at St. John’s Regional Health Center in Springfield, MO on Sunday, May 22, 2011. He was born on December 17, 1931 in Wrigley, TN to Vernie and Lula Skelton Choate. Eli was retired with 39 years of service in the United States Navy. His service to our country took place during the Korean and Vietnam Wars, and the Cuban Crisis. He was a Prisoner of War for 22 months of that time. He married Fern Fortney on October 31, 1965 in Las Vegas, Nevada. Their union continued until Eli’s death. He was well known in El Dorado Springs, Missouri for his work and involvement in many organizations, including the VFW, as well as owner and operator of Choate’s Appliance Store for many years. Eli was a wonderful father, grandfather, husband, brother and father-in-law. His son always referred to him as “Pappy”, a term of endearment for the well respected, man of honor he was. Friends could count on him to help them, or even a stranger, if the need arose. His kindness extended to all he connected with. Eli was preceded in death by his parents and his son: John Woodrow Gundy; two brothers: Willie and Zerdie Choate; and a sister: Maggie Tarkington. He is survived by his wife: Elizabeth Fern Choate; two grand-children: Kimberlee Ann Gundy Kelley and John Jason Eli Gundy; two great-grandchildren: Darrian Erin Kelley and Deardin Gracin Kelley; two sisters: Sandy Bryant and Alvena Hudspeth; two brothers: Harding Choate and Harold Choate; daughter-in-law: Brenda Gundy Mincks; and a special nephew, Jim Hudspeth. Eli will be laid to rest near his birthplace in Wrigley, Tennessee with full military honors provided by the United States Navy. The date of interment is pending. Cremation Society of Tennessee is assisting the family.