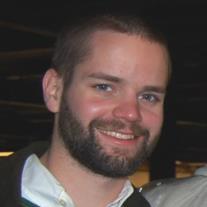 Edward Corum Ebbert was born May 31, 1988 and his young life ended suddenly and unexpectedly on March 8, 2015. He was Cory to his family and oldest friends, and Eddie to friends during and after high school. He packed a lot of life into his 26 years. He was born in Nashville, Tennessee, and at age 4, his family moved to England, just west of London. His early schooling was in England. His family stayed until he was aged 10, when they moved to Hendersonville, TN. He attended middle school at Ellis Middle School in Hendersonville, and graduated from high school at Montgomery Bell Academy, where he participated in theater and debate. He was a National Merit Scholarship finalist, received many offers for scholarships, but chose to go to New York to attend college. He graduated from New York University with a BA degree in Journalism and a minor in French and art history. He lived and studied in Paris for a semester and afterward, traveled and adventured with lifelong friend, Lucas Hofmeister. After graduation, he wanted to remain in New Yorkthe city he lovedand so he did. And while journalism proved not to be the most productive course of study toward a career, he made a good living as a server and delighted those at his tables. He also thoroughly enjoyed playing tour guide to all visitors and big brother to his sister who joined him in New York City when the time came for her to attend college. He returned to Nashville in late 2012 and found a city that had grown and diversified. Pleasantly surprised, he settled in. He learned some of the ropes of corporate America at Service Source, where he excelled at his job. But mostly, he learned about himself, and what he was capable of achieving. He was looking forward to attending law school one day.

Cory/Eddie was an “unbridled positive life force” in the words of one of his best friends, and traveled to the beats of many drums that others might not hear. He was exceptionally bright, insanely curious, ever ready to challenge. He loved nothing better than a good debateand could amaze by responding to almost any subject with some random and relevant fact. But most importantlyhe was gentle and kind to everyone; generous in all things; loving and supporting to all who needed a lift in their lives. He loved listening to music, singing, reading, learning, writing, movies, food, talking, mugging for the camera, children, people from all walks of life, and a good time. Ohdid he love good times. He was the chief orchestrator of good times, whether he was with family or friends. He was sensitive to others and was the first to reach out to someone he detected might be left out, or offended or just sad. He judged no one. He lived life to the fullestand while that has been said of many, he actually lived up to it. He was gifted with many talentshis brilliant mind; his gift for music; his writing; his uncanny ability to influence others to his way of thinking; cooking when he wanted to; and anything else to which he set his mind and devoted his time to doing. He was also burdened, as we all are, with some challenges, but very determined not to let those define him. He was looking forward to attending law school, and the future ahead. He was intensely privateso he kept many things to himself. Above all, he was a good soulwith a huge and loving heart and a free spirit.

Cory/Eddie was loved by so many, his presence in their lives will be sorely missed. He truly never met a stranger. In particular, his absence will be greatly felt by Sprigg and Kathy, his dad and mom; Wendolyn, his much-adored sister; Gladys and Smokey, his much-photographed pets; and Ryan, his dear partner. He’ll also be missed by his many aunts, uncles, cousins, friends, acquaintances, and co-workers.

The Cremation Society of Tennessee is assisting the family, condolences may be made at www.cremationsocietyoftn.com.