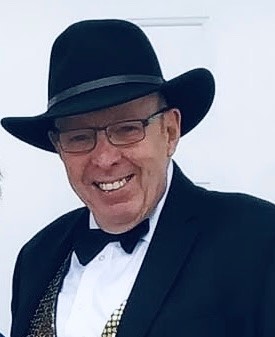 Dr. Rodger Eakin – pastor, family man, and fried chicken enthusiast – died on Wednesday, May 19, 2021, at age 74.   He was a true Original, a man who lived life expansively and exuberantly, and who had such wide-ranging hobbies as lawn care, fixing everything with duct tape and string, and sticking his finger up his nose whenever someone tried to take his picture.

Rodger spent much of his life outnumbered by the women in it.  Born from humble beginnings in Northern Alabama, he was the oldest child of Floyd (“Mink”) and Christine Eakin, with three younger sisters and one brother rounding out the Eakin Nut House.  At Belmont University, he met Joan Culbertson, to whom he was married in 1970.  Rodger and Joan produced two daughters and adopted one dog they named Benji (whom Rodger relied on as the sole other masculine influence in the sea of estrogen in which he lived).  He is survived by his wife Joan of nearly 51 years, their daughters Elizabeth Eakin O’Neill (Daniel) of Knoxville, TN, and Rachel Eakin of Raleigh, NC; and by all three sisters – Pamela Eakin Deck of Lafayette, TN; Deborah Eakin Frye of Bowling Green, KY; and Melba Eakin Strickland of Talladega, AL.  He was preceded in death by his parents, his brother Milon Eakin of South Pittsburg, TN, and Benji the Yorkipoo of Ft. Worth, TX.

Rodger earned the Bachelor of Arts in Religion from Belmont in 1969 and later the Master of Divinity in 1983 and the Doctor of Ministry in 1987, both from Southwestern Baptist Theological Seminary, Ft. Worth, Texas. He later became certified to serve as a hospital chaplain at VA hospitals in Middle Tennessee. Over the half-century of his pastoral career, Rodger lived and worked in three different states, served at seven different churches, wrote and delivered over 6,000 sermons, and chased approximately 300,000 rabbits, metaphorically speaking (or, perhaps just one rabbit, 300,000 times.)  While the ministry was not always kind to Rodger, he never wavered in his faith in God, and in the saving grace of Jesus Christ, which is freely given to any who seek Him.

Many saw Rodger (aka “The Rev”) to be a well-dressed gentleman who enjoyed matching his ties and pocket squares, picking exactly the right hat to complement his outfit, and occasionally sporting a saucy little boutonniere to add a formal touch to his ensemble. He was known for his wide array of colorful suspenders, cowboy boots, and (in the 80s and 90s) an impressive collection of western-style bolos. There was, however, a dark side to Rodger’s wardrobe, one that consisted of shorts layered over sweatpants (because the pants didn’t have pockets), pant legs tucked into knee-high tube socks, and those same tube socks hand-stitched to house slippers, which created a Frankenstein’s monster of a Mukluk for casual at-home wear. This particular signature look was often topped with red suspenders and any form of headgear Rodger might find lying around; most notable of which was a stocking cap he made by flipping a relative’s stump sock upside down, and to which he glued an artificial redbird for a festive seasonal touch.

Rodger loved passing the time by working in his yard; he said it was one of the few things he could see to completion in a relatively short amount of time, and he appreciated the sense of accomplishment a well-maintained yard gave him. He was an avid reader, a casual guitarist, and enjoyed dabbling in rudimentary woodworking (by which he meant putting screws and nails into wood for various unspecified reasons.) He never turned down coffee and conversation with anyone, though he collected coffee mugs only because a church member once invented that hobby for him and told all the other church members that he did.

To the despair of his immediate family, Rodger suffered happily from severe MNTL (“May Need That Later”) disorder. He was incapable of throwing away spare screws, used screws with stripped heads, wire, scraps of wood, string, still-sticky pieces of tape, and anything that might conceivably be useful, if an infinite number of monkeys were given an infinite number of typewriters and told to come up with reasons why these things might come in handy “someday”. He furiously hoarded pens and pencils, notepads, and any paper with a reasonable amount of writing space remaining on it. He left behind a fairly decent collection of VHS tapes, 8-track and cassette tapes, and CDs, and even a large selection of vinyl records (which have fortunately become trendy again, possibly confirming his belief that he would, in fact, Need That Later.)

Rodger truly detested technology (because computers can smell fear), traveling (though he grudgingly did quite a bit of it), golf (though he never really played), and — perhaps antithetically for a Southern Baptist preacher– casseroles (because he did not enjoy eating food that he believed to have been pre-chewed.)

He was an utterly authentic person, a definitive WYSIWYG* of a man. He approached life through a filter of fun and believed everyone he met was a friend-waiting-to-happen. His ministry over the past 50+ years has touched thousands of lives in ways he never even imagined. His family and friends grieve for his loss, but celebrate that he is finally in the presence of God, the place he has always considered his true Home.

The Celebration of Life for Bro. Rodger will be held at the Proclamation Church (formerly Glenwood Baptist Church, his last pastorate) at 308 East Thompson Lane, Nashville, TN 37211 on Saturday, June 26, at 10:30 am.  This will be followed by a Committal Service at 3:00 PM at Burt Baptist Church (1087 Burt Road, Woodbury, TN 37190), his first—and in many ways, most cherished—pastorate, where his ashes will be dispersed. (He requested his ashes be placed into a seed spreader and rolled across the Burt lawn by his wife and daughters. His wife has made clear this Will Not Happen.)

The family expresses their gratitude for the extravagant outpouring of love and support from all those who knew and loved Rodger. He and the family were truly humbled and uplifted by the sheer volume of social media comments, cards, phone calls, texts, and visits during his illness.

In lieu of flowers, the family asks that donations be made to Gideons International in Rodger’s name for the purchase and distribution of Bibles (gideons.org/donate).

*What You See Is What You Get

Cremation Society of Tennessee is assisting family with arrangements. Condolences can be given to the family by visiting www.cremationsocietyoftn.com.