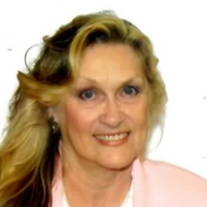 Donna Jean (Naugler) Blackburn, 75, passed away on Mother’s Day, Sunday, May 14, 2017 at Vanderbilt University Medical Center in Tennessee after a long, hard battle with Lung cancer.

Having won this fight over 20 years ago, giving up was never an option for her and she remained a fighter until the very end. Donna was born on June 22, 1941 in Halifax, Nova Scotia, Canada and moved to Detroit, Michigan at the age of five and then in 1965, moved to Goodrich, Michigan to raise her four children. In 1974, she moved to Gladwin, Michigan and called it home for the past 43 years. She was fiercely independent and enjoyed the outdoors. She had a passion and talent for art and photography, winning many local and state contests to include having her work titled “The Little Fisherman” licensed and produced as a collectible by Zolan Industries. Above all else, she loved her family and took great pride in all her grandchildren. She never met a stranger, and life experience gave her a unique compassion for others. She was our mother, our NaNa, our Gram, our sister, and our friend – we will miss her greatly and always.

A memorial service will be held 1pm on Saturday, June 24, 2017 at the Oak Grove Log Community Church, 5636 Cedar Lake Road, Gladwin, MI 48624. Immediately after the memorial service, a lunch will be served at the church’s hall so we can get together and remember Donna’s life.