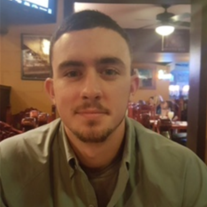 Brighten was born July 24, 1994, in Okmulgee, OK, the son of Kevin and Nancy Gibson Shoemake. He was currently working as a Patient Care Technician in the Emergency Department at Vanderbilt Medical Center while pursuing a degree in Nursing at Columbia State Community College. Emergency medicine, in all its forms, was Brighten’s passion and he aspired to being part of a LifeFlight team.

Brighten’s name fit him perfectly. He had a way of brightening up the atmosphere around him and impacting the lives of those around him. As a little boy, Kevin and Nancy would sing “You Are My Sunshine” to him, as he was such a bright and shiny part of their lives. Brighten had such an infectious smile and loved having fun no matter where he was, but there was also a serious side to him.

A memorial service for Brighten will be conducted Saturday at 11:00 A.M. in the Worship Center of Thompson Station Church with Pastor Tom McCoy officiating. The family will receive friends immediately following the service during a reception at the church.

Cremation Society of TN is assisting the family with their arrangements. Condolences may be sent to the family at www.cremationsocietyoftn.com.