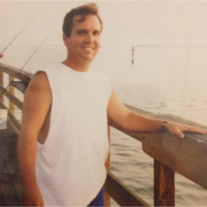 Barry was born on September 14, 1967 in Salisbury, North Carolina to Brent Walker, Jr. and Shirley Ann Barrett Walker. Barry graduated from Southwest Missouri State University with a B. S. in mathematics. He worked in food service management, where he opened and managed restaurants and kitchens in many locations for companies such as Sysco. He was an extremely hard worker and was an over-achiever in his profession.

Barry’s family and friends remember that he had a big, beautiful smile that just beamed. He was a fun-loving guy and was known as the life of the party. The number one, most important thing about Barry is that he never met a stranger in his life! If he met someone new, he would know their life story within an hour and if they needed help, something or someone, even when he didn’t have much money himself – he would be doing anything he could to help and they would have a new friend. Barry never shut up and he would “talk your ear off”. He was incredibly smart and a good person.

The family plans to celebrate Mr. Walker’s life with a memorial service in Orlando, Florida at a later date.

Cremation Society of Tennessee is assisting the family with the arrangements and online condolences may be made to the family at www.williamsfh.com.