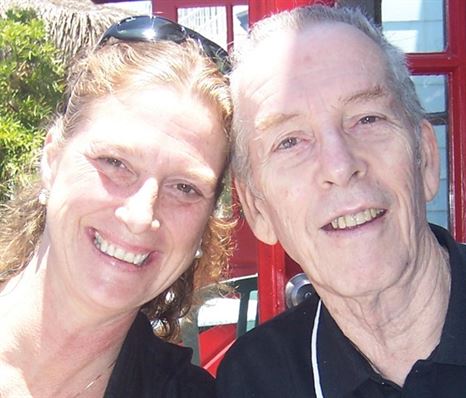 Mr. William Walker “Bill” Houck, age 85, most recently of Brentwood, TN, died Thursday, June 23 at the Sunbridge Care and Rehabilitation Center in Fayetteville, TN. Born in Huntington, WV, Bill grew up in Elmira, NY, the second son of the late Harvey and Irma Walker Houck. While still in high school, at age 17, he joined the United States Navy. Following his basic training at Sampson, NY, he served aboard the USS Miami, assigned to the Pacific Theatre of WW II. In 1944, the USS Miami became part of “Task Force 58″, seeing action in Saipan, Tinan, Iwo Jima and Okinawa. After being released from duty, Bill returned to school and studied US History at Syracuse University, NY. He continued his service to others as a NY State Trooper, before joining NCR National Cash Register as a sales agent in the mid 1950’s. He was married for 7 years to Vernice Bair, producing one child, Kim pictured with him. In Elmira, NY, he was known and remembered as the owner of “Bill’s Bar”, and a well-loved bartender at “Moretti’s”. Leaving New York, Bill moved to Las Vegas, NV working at the Las Vegas Hilton for many years until his retirement. Ultimately, his health care needs moved him to Tennessee to be near his daughter in 2009. In addition to his daughter: Kim Eric Acosta of Brentwood, TN; Bill is survived by a brother: Harvey Houck, Jr. of Lewes, DE; and a grand-daughter: Kaleigh Acosta of Brentwood, TN. Private services will be conducted by the family, who is being assisted by the Cremation Society of Tennessee.