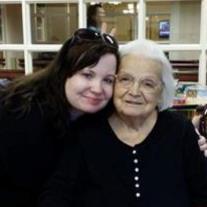 Mrs. Anna Turchi Felkowski, age 94, of Franklin, passed away on Wednesday, May 27, 2015, at Claiborne and Hughes Nursing Home in Franklin.

Anna was born July 13, 1920, in Raritan, NJ, the daughter of the late Santo Turchi and Attilia Talevi Turchi. Her husband, the late Edward M. Felkowski, preceded her in death in 1988. Before moving to Middle Tennessee, Anna had lived for twenty years in Naples, FL. She had worked as a supervisor in a sewing factory and was a member of St. Philip’s Catholic Church in Franklin. Anna was a sweet lady who loved to knit and crochet. She enjoyed playing bingo and thoroughly loved spending time with her grandchildren and great grandchildren.

Cremation Society of TN is assisting the family with their arrangements.